The Philosophy of the Saucers 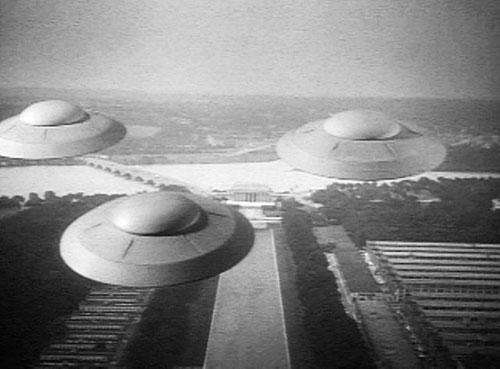 Possibly One of the most interesting aspects of the study of flying saucers, beyond the reality that they are real and extraterrestrial, is their philosophy. What manner of creatures builds and flies them? What do they look like? How do they think? Are their ideas and ideals similar to ours? Could we understand them? All these and many other questions plague the serious investigator.

If we are to rely on sighting data alone we are bound to get a one-sided idea of these creatures. For example, we see saucers traveling at terrific speeds and then suddenly stop or change direction. Under our concepts of physics no creature of flesh, blood and bone could withstand the tremendous forces, which would be associated with such actions. Therefore, we are likely to assume that the Saucerians must either be some manner of robot or a creature the like of which we have never encountered.

If Tables Reversed
Again, it is hard to understand why any race of creatures having the tremendous power at their disposal which we see demonstrated by the saucers, should be content to fly rather aimlessly over the globe, without doing something more definite. If the tables were reversed, we would most certainly would. After a brief reconnaissance we would land and announce to the natives that we are taking over. The fact that the saucerians have made no such move appears to indicate that they must regard us in the same general category as the other flora and fauna native to this planet, and to them our civilization is co primitive as to be indistinguishable from that of the lower animals and insects.

We could go on speculating in this manner for quite a while without coming anywhere near the truth. Fortunately the people who come from elsewhere in the flying saucers seem fit to make contact with people of earth, and to impart such information and understanding as the contact were capable of assimilating or passing along to others. There have been many published instances of contacts with these people from elsewhere and people of this earth, and a very great more that have not been published. As is the case in any new and romantic field, there are those who exaggerate, but it is not too difficult to establish that the vast majority are honest and authentic, For instance, when a dozen or so independent contacts having no common connection, and each believing that he or she has been favored above all others to receive this message, all tell the same message, even to the names and descriptions which tally perfected, one has little choice but to believe that they are telling the truth.

Magnificent Philosophy
Furthermore, when the material given to us through the many channels is all assembled and analyzed, it adds up top a complete and elegant philosophy which makes our efforts sound like the beating of jungle drums. The people tell us of a magnificent Cosmic Plan, or which we are part, which transcends the lifetime of a single person or a nation, or a civilization, or even a planet or a solar system. We are not merely told that there is something beyond our immediate experience; we are told what it is, why it is, and our relation there-to. Many of our most vexing problems are solved with a few words; at least we are told of them if we have the understanding and fortitude to apply them. We are told of the inadequacies of our science and we have been given the basic grounding for a new science, which is at once simpler and yet more embracing than the mathematical monstrosity, which we have conjured up. We have been told of a way of life, which is utopian beyond our dreams, and the means of obtaining it. Can it be that such a self-consistent, magnificent philosophy is the figment of the imaginations of a number of misguided morons? I do not think so.

If the only evidence we had was philosophical, we might justifiably suspect it, but when coupled with the reality of the observations, thousands of them, we cannot dismiss it so easily. This is especially true when we consider that the science that has been passed to us from the people from elsewhere explains in a manner which we have been quite unable to do why the saucer behave as they do, and how it is that they can do things which to us are virtually impossible. The science and performance check perfectly.